Will pro-censorship liberals finally get a taste of their own medicine?

One of President Joe Biden’s official tweets was hit with a Twitter notice Friday, with the social media platform providing “context” that made the Democrat look like a total Pinocchio.

The tweet in question made bold claims about the tax ramifications of Biden’s Inflation Reduction Act. 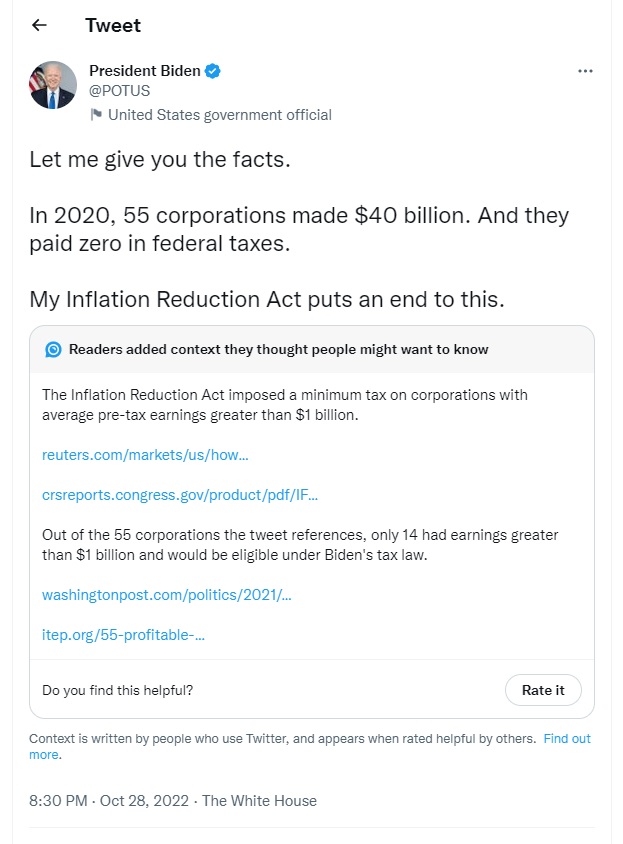 Biden claimed his spending bill (one of them, rather) would hit 55 big corporations that don’t pay federal taxes with a bill from the federal government.

Trending:
Joy Behar: Biden Is Given the 'Benefit of the Doubt' About Classified Documents Because 'We Don't Think' He Is a Liar

What Biden claimed were the “facts” were quickly debunked — through a Twitter “readers added context” notice, no less.

The “Birdwatch” fact check-style feature that Twitter slapped Biden with isn’t a new innovation of Elon Musk’s reign at the company. However, its use on a Biden tweet could signal a new era for the social media platform, which has a history of targeting conservatives.

The Twitter program was released in January 2021, promising to “address misleading information” using the input of selected Twitter users, rather than the tech company’s full-time cadre of censorship specialists.

It was expanded in September, according to a report on the technology site The Verge, which noted that “[o]nce a Birdwatch note is attached to a tweet, users are 15 to 35 percent less likely to engage with it compared to users who aren’t shown the note.”

The Birdwatch “reader context” attached to Biden’s tweet cited analysis of the Inflation Reduction Act from Reuters, pointing out that only the most profitable big companies would pay new federal taxes under the legislation.

Biden has used the “55 companies” line before, but it’s not accurate, according to The Washington Post. The legislation only hits 14 big companies with a new federal tax bill, according to a Post analysis.

Some pointed to the unusual Biden fact check as the Democrat’s first taste of an even playing field on Twitter — now that pro-free speech mega billionaire Elon Musk is in charge of the company.

Related:
It's Not Just Gas Stoves Democrats Are Coming For - Here Are Other Home Appliances on the Chopping Block

Twitter “fact checks” and “context” notices have been predominantly used against conservatives, most frequently during the 2020 election.

The platform-implemented notices have been less common during President Joe Biden’s tenure, in what must be a complete and total coincidence.

It’s not clear to what extent the embarrassing “fact check” is the result of Musk’s acquisition of the company.

However, it’s definitely possible that Twitter’s censorship team decided to slap Biden with one of the bizarre notices to justify their current operating methods to the company’s new ownership.

In any event, all indications suggest that Musk isn’t going to accept Twitter’s current policies as the path forward for the company.

Perhaps if Biden objects to being “fact-checked” on Twitter, he can be politely reminded that Twitter is a private company, and that he’s free to take his internet presence elsewhere.

Just as partisan liberals have told conservatives who objected to being censored for years.

A daughter's troubled history of social media posts included one in which she "abdicated" the throne of the United Kingdom.
By Jack Davis, Western Journal  January 29, 2023

The suspect in the home invasion assault of Paul Pelosi doubled down on his actions in a jailhouse phone call.
By Richard Moorhead, Western Journal  January 29, 2023

The mayor of Cincinnati went viral -- and not for the best reasons -- when he posted a video about the AFC Championship tilt on Sunday.
By Bryan Chai, Western Journal  January 28, 2023

Should Child Rapists Get the Death Penalty? DeSantis Proposal Could Challenge SCOTUS Ruling

Should the death penalty be on the table for child rapists? Florida Gov. Ron DeSantis thinks so.
By Elizabeth Stauffer, Western Journal  January 28, 2023

Michigan state troopers shot and killed a man after he pointed a laser at, and then fired at, a police helicopter.
By C. Douglas Golden, Western Journal  January 28, 2023

Graphic footage has been released of the beating suffered by a Memphis man that led to five police officers facing murder charges.
By Jack Davis, Western Journal  January 28, 2023

A mother of three will be charged with the murder of her children after allegedly strangling them and then attempting to kill herself.
By Carson Choate, Western Journal  January 28, 2023

Watch: 98-Year-Old Preacher Decides to Go Skydiving for Birthday - Look How Spirited He Is

A retired pastor and military veteran celebrated his 98th birthday by jumping out of a plane.
By Richard Moorhead, Western Journal  January 28, 2023

Former President Donald Trump has a powerful response to the lawlessness that has been on display in Atlanta.
By Jack Davis, Western Journal  January 28, 2023
Next