Former President Donald Trump announced Tuesday that he will travel to a place Vice President Kamala Harris has so far neglected to visit.

“I have accepted the invitation of Texas Governor Greg Abbott to join him on an official visit to our Nation’s decimated Southern Border,”  Trump announced in a message posted to his Telegram account. He said the visit will take place on June 30.

Trump visited the border on one of his final days in office.

During that January visit, he said that reversing his policies would create “a tidal wave of illegal immigration, a wave like you’ve never seen before,” according to Fox News.

“They’re coming because they think that it’s a gravy train at the end,” Trump predicted.

In his newest announcement, Trump criticized the Biden administration and lamented the conditions at the border.

“The Biden Administration inherited from me the strongest, safest, and most secure border in U.S history and in mere weeks they turned it into the single worst border crisis in U.S history. It’s an unmitigated disaster zone,” Trump wrote.

Trump noted the changes that have taken place at the border over the past five months as the Biden administration swiftly reversed his policies.

“We went from detain-and-remove to catch-and-release. We went from having border security that was the envy of the world to a lawless border that is now pitied around the world. Biden and Harris have handed control of our border over to cartels, criminals, and coyotes,” he wrote.

“Drug dealers, MS-13 gang members, human smugglers, sex traffickers, and the criminal elements of the world now have free reign. Hospitals and schools are getting crushed and public health is being sacrificed all in service of a radical left anti-borders agenda. Our brave border agents and courageous ICE officers have been illegally stopped from doing their jobs.

“Our Nation is now one giant sanctuary city where even dangerous criminals are being cut loose and set free inside the U.S interior on a daily basis,” Trump wrote.

Trump also pointed out that neither President Joe Biden nor Harris — whom Biden has put in charge of the illegal migration crisis — has visited the border.

Harris has dismissed the notion that she should do so.

“You haven’t been to the border,” Holt countered.

“And I haven’t been to Europe,” Harris said with a laugh. “I don’t understand the point that you’re making.”

Cringe. Kamala Harris doesn’t get it.

Holt: “Do you have any plans to visit the border?”

Holt: “YOU haven’t been to the border.”

Harris: “…..and I haven’t been to Europe. I don’t understand the point you’re making.” pic.twitter.com/fFXMf8X0b6

“If this weren’t bad enough, Biden and Harris won’t even tour the scenes of the wreckage they created, or come down and visit with the Border Patrol and ICE heroes risking their lives to defend our Nation at a time when the White House is doing everything it can to make their job totally impossible,” Trump wrote in his statement.

“What Biden and Harris have done, and are continuing to do on our border, is a grave and willful dereliction of duty. My visit will hopefully shine a spotlight on these crimes against our Nation — and show the incredible people of ICE and Border Patrol that they have our unshakeable support,” Trump concluded.

Jack Davis, The Western Journal
Media Latches Onto DeSantis-Trump Rivalry Story - Twitter Users Quickly Point Out What Might Be Going On
Carlson: GOP's New 'Commitment to America' Plan Is Missing the Mark - Points to Italy to Make His Case
'I'm Done': Judge Walks Out of Courtroom in the Middle of Christmas Parade Massacre Suspect's Sentence
Dem Senator Politicizes Hurricane Ian in Sickening Way: As Storm Targets Florida, 'We've Got to Win in November'
Gutfeld Thinks He Has His Finger on Why His Show Is Successful, Offers Advice to 'The View's' Sunny Hostin
See more...
Comment Down Below
Advertisement 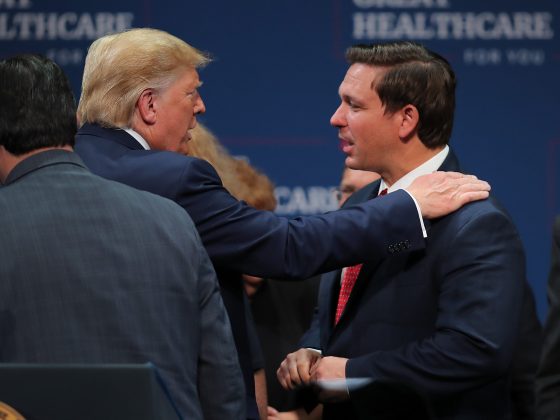