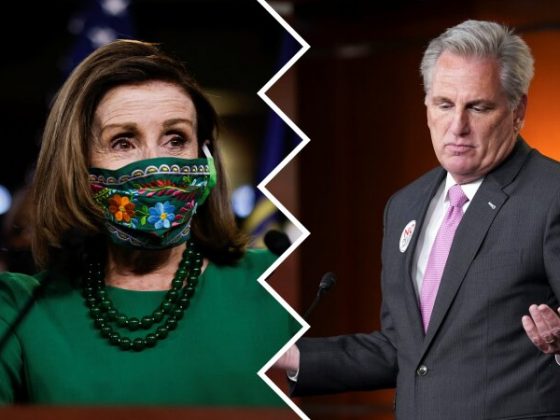 Pelosi Torches McCarthy for His Opposition to Mask Mandate: 'Moron'

After Man Passes Out Driving on Interstate, Good Samaritans Race to Rescue Him from Moving Vehicle

Rep. Tim Ryan (D-Ohio) is laying into Republican lawmakers who oppose an independent commission to investigate the events at the U.S. Capitol on January 6.

During a speech on the House floor Wednesday, Ryan yelled at Republicans for their opposition, after thanking those who do support it.

“I want to thank the gentleman from New York and the other Republicans who are supporting this and thank them for their bipartisanship,” Ryan said. “To the other 90% of our friends on the other side of the aisle, holy cow! Incoherence! No idea what you’re talking about!”

“Benghazi! You guys chased the former secretary of state all over the country, spent millions of dollars. We have people scaling the Capitol, hitting the Capitol police with lead pipes across the head and we can’t get bipartisanship! What else has to happen in this country? Cops! This is a slap in the face to every rank and file cop in the United States. If we’re gonna take on China, if we’re gonna rebuild the country, if we’re gonna reverse climate change, we need two political parties in this country that are both living in reality and you ain’t one of ’em!”

Ryan’s remarks came before the House of Representatives voted and approved a bill to create the commission.

The bill was passed with a 252-175 vote, with the support of 35 Republicans and all Democrats. It now heads to the Senate.

The commission would include an equal number of Democrats and Republicans, and members “would have to be experts in intelligence, law enforcement, counterterrorism or related fields and could not be currently serving in government,” according to The Hill.

“After careful consideration, I’ve made the decision to oppose the House Democrats’ slanted and unbalanced proposal for another commission to study the events of January the 6th,” McConnell said on Wednesday.

U.S. Capitol Police members wrote a statement — not as a formal statement from the organization — expressing their “profound disappointment with the recent comments from both chambers’ minority leaders expressing no need for a January 6th commission.”

“The brave men and women of the USCP were subjected to hours and hours of physical trauma which has led to months of mental anguish,” the statement added.

Pelosi Torches McCarthy for His Opposition to Mask Mandate: 'Moron'

“The threat of bringing masks back is not a decision based on science.”

“I don’t think we’re gonna get enough bang for our buck by telling vaccinated people they have to wear masks at all times to make it worth our while.”

“She does not represent the Republican conference, or Republican voters, or the American people.”

After Man Passes Out Driving on Interstate, Good Samaritans Race to Rescue Him from Moving Vehicle

When a video of the incident was posted online, people immediately began to posit a fight had broken out on the road.
Amanda Thomason, The Western Journal July 28, 2021

An arrest warrant has been issued for a Democratic legislator who fled the state rather than debate an elections integrity bill.
Jack Davis, The Western Journal July 28, 2021

They're blaming the unvaccinated for the new recommendations. We used to call this scapegoating, but now it's becoming public policy.
Christine Favocci, The Western Journal July 28, 2021

Finally, on July 17, a worker at a nearby ranch who'd spotted the lost posters also spotted a tiny, matted white dog at the side of the road.
Amanda Thomason, The Western Journal July 27, 2021

Report: 50,000 Immigrants Released Into US Without Court Date - Only a Small Fraction Report To ICE

Illegal migrants are not only being released by Border Patrol agents without court dates, but are also not reporting to ICE, per a report.
Kipp Jones, The Western Journal July 27, 2021

Miraculously, the baby was alive, though she was drenched in motor oil and sustained a fractured skull and third-degree burns.
Amanda Thomason, The Western Journal July 27, 2021

Capitol Cop Claims Jan. 6 Was Orchestrated by a Hit Man, Implies It Was Donald Trump